With the popular works like ‘The Matrix’ or ‘The Terminator’, where the humans get replaced, enslaved or hunted to almost an extinction by their own creations, our deepest fears of technology taking over humans have time and again resurfaced. If you look back, from mythology to science fiction, human and machine have been often pitted against each other. This essay portrays that although technology can be intimidating and many of today’s skill sets, careers and business models will be challenged by the rise of the machines, there is no escaping them. As Gary Kasparov points out – “We must face our fears if we want to get the most out of our technology, and we must conquer those fears if we want to get the best out of our humanity.” 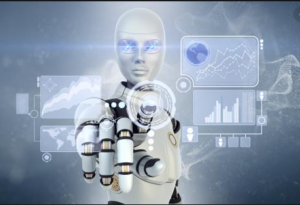 mankind has looked for ingenious ways to get rid of grueling manual labor and duties. We tamed animals, invented the wheel, crafted new tools and made novel machines. The successful inventions and adaptations have generated wealth, upgraded our lifestyle and constructed new opportunities. Machines can’t be separated from our daily lives. As a blogger and a self-claimed gadget freak, I have even forgotten the count of times I use Google or the Google translator for work. And what is it? “SMT” (Statistical Machine Translation)!  Those of you who use online translation to catch the gist of a news article from a foreign newspaper will know that it is far from perfect. But we use our judgment and make sense out of it.

A century ago, when elevators became automated, many people were scared to go inside without an operator on-board? Do you recall the first time you took an elevator? Or take an instance of a public railway. In 1825, people thought that human bodies were simply not capable to withstand the traveling at a speed of thirty miles per hour! It took humans to take some time to get used to the technology but here we are! At the point of using driver less cars and isn’t it saying something?

Today, when we are living in a world on the cusp of the next industrial revolution and are witness to breakthrough advances like Artificial Intelligence, Internet of Things (IoT) or nanotechnology, wondering if robots or machines are coming to steal our jobs can’t be far from our imagination. But is our fear real or baseless? Are machines really so bad? The answer is NO. Let’s explore some facts that would throw light into our assumptions. Since old times, humans have feared technology expansion, afraid that it would put them out of work. But it hasn’t.

It all depends on perspective. While one can see these changes as a humanoid robot replacing our existence, one might choose to see it as a hand that can guide us move forward than where we are. With the advent of antibiotics, many had complained about putting grave diggers out of work, but the invention of antibiotics was a great boon for mankind. Hence it doesn’t serve to romanticize the loss of jobs due to the modernization.

History has shown time after the time that technology paves a path and creates far more than it destroys for new industries, jobs and prosperity. We are forgetting that if robots can take over our existing jobs, many new are getting created. As Kasparov proposed, some of these new jobs, like a drone pilot or robotic surgeon, still need the operator to work together closely with the machine. The productive and profitable collaboration of human and machine is here to stay.

As a Chess grand-master who has played the game against the machine, Garry Kasparov has mentioned his observation that machines are really good at taking on board huge amounts of information and making sense of it in a way that humans simply can’t do. But they have no perception or mindfulness. Machines were created to reduce our workload.  They are mechanical and don’t have the capabilities to understand the situations and behave accordingly. They have a man-made intelligence. While humans can do anything original, machines can’t. They can’t think independently.  They are programmed by humans and do as instructed. They can’t question their duties and just follow the orders.

Nowadays Machines with artificial intelligence prepare coffee, play games, even diagnose patients, carry out medical surgery and drive cars. But humans are superior when it comes to reasoning, originality, creativity, evaluating risks and using resources beyond limits to name a few.

As Andrew Ng, chief scientist at Chinese e-commerce site Baidu, puts it: “There’s a big difference between intelligence and sentience. Our software is becoming more intelligent, but that does not imply it is about to become sentient.”

Science and technology advancements always come with pros & cons. Like two sides of a coin, the fire that cook food can also burn down the house. With more and more machines replacing the physical job and getting over unskilled jobs, we will get more time to focus on exploring and elevating activities that bring us joy and satisfaction.

As IBM’s head of research, Guru Banavar, mentions, “AI will work with humans to solve pressing problems such as disease and poverty.”

Being a human is more than playing a game of chess or developing a skill like putting a hammer to the metal. We humans will still have plenty to do: for an instance painting a masterpiece or composing soulful music.

While discussing the technology and its implications on human life as species, we have always feared automation and then eventually accepted it. Although technology advancement may seem turbulent, we are living at the best time in human history where wonderful things are happening. We as species possess the strong human spirit and collective ability to adapt and grow.

I completely agree with this view of Kasparov as he urges us to not to hinder progress or fear machines: “We must speed them up. We must give them, and ourselves, plenty of room to grow. We must go forward, outward and upward.”

“So, I want all the people reading this article here to think that whether you want to live the rest of your years fearing the machines or be a part of a new day that is on the horizon! We are at the door of this unique opportunity to grow and evolve and it will be because of a lot of magnificent people like you, and some pretty incredible men who take us to the time where humans have never been taken before. Are you ready?”